Crafted for the Sparkling Season

There are few sights quite so inviting – quite so laden with potential – as an elegantly shaped bottle, glass misting with condensation, cork still swathed in gleaming foil. But what is it that makes sparkling wine a byword for enjoyment an indulgence at Christmas? And how should it best be enjoyed?

A short history of sparkling

It’s taken centuries of cork-popping to bind together the idea of sparkling wine and celebration. But there’s little doubt that our fascination with this style of wine is inextricably linked to its bubbles.

Our relatively new English sparkling tradition stands on the shoulders of Champagne’s long – and delightfully myth-filled – history. Although there’s some disagreement about when Champagne was invented, we know that “traditional method” sparkling was first observed well over 300 years ago (possibly by a famous monk, possibly not).

In the 17th century, the Champagne region – like England today – was a cool climate for viticulture. Typically, as soon as the grapes were picked, they were pressed; the juice was left in barrels to ferment. However, as autumn temperatures dropped, the fermentation process stopped, leaving unfermented sugar in the liquid. It was only after winter, when spring’s warmer weather arrived, that a second fermentation would begin. It was this second fermentation that created the prized bubbles.

It was some years before advances in technology (the advent of thick glass bottles and tight cork stoppers) allowed these bubbles to be captured. Winemaking techniques developed rapidly too, as producers learned that by controlling the sugars and the yeast, they could make the bubbles more reliable.

Those who had a chance to taste these effervescent wines were entranced; Champagne became a fashionable choice amongst Europe’s royal courts and aristocrats. By the 19th century, no high-society event was complete without liberal quantities of sparkling. Our fascination with bubbles has continued undimmed ever since. “There’s something quite wonderful about a glass with bubbles in it,” says Laura Rhys, Master Sommelier. “Even just to look at it – it’s special in its own right.”

Sparkling wine and Christmas
Today, sparkling wine is a luxury that can be dressed up or down. Its mood-lifting, shape-shifting appeal means we’re as happy sipping a glass of bubbles curled up by a winter fireside as at a lavish party. Perhaps that’s why sparkling wine fits so naturally in our Christmas celebrations – it can bend to fit each of our festive traditions.

But there’s more going on here than just the aesthetics of bubbles. Sparkling wine is uniquely suited to the culinary smorgasbord of Christmas cooking – adeptly taking on everything from sugar and spice through to rich pâté, meats and cheeses. Sweep aside the Christmas morning chaos of ripped wrapping paper, and you’ll find it’s a glass of sparkling – perhaps with smoked salmon and scrambled eggs – that restores order to proceedings.

Later, amidst the candle-lit glow and scents of nutmeg and cinnamon, it’s the elegance and poise of a glass of sparkling that signals the start of the festive feast. Then, finally, as the shadows lengthen, it’s the joyful brightness of sparkling wine’s effervescence that revives the mood, energising the evening stroll towards the cheeseboard. “What’s wonderful about sparkling wines is you can serve the same wine alongside so many flavours,” says Laura Rhys, Master Sommelier. “Think about a selection of canapés – smoked salmon blinis, pâté on crostini, cheese gougères, oysters – it’s a wide spectrum of flavours, but all would be perfect with a sparkling such as Gusbourne’s Brut Reserve 2019.”

But how does sparkling manage to serve each purpose so well? Laura has a theory. “When we think about festive food, it’s generally quite rich and luxurious,” says Laura.  “Then look at the structure of a sparkling wine like Gusbourne Brut Reserve: you have a lot of weight, fruit character, richness and concentration, balanced with (or acting as a counterpoint to) acidity and the freshness which that brings. Plus, the lees ageing, which adds more complexity and multi-layered character.

“There’s a lot going on in a glass – which is why you’ll find it can work alongside food that’s rich, spiced or deeply flavoured. The bubbles and the texture that Gusbourne has in the mouth has a natural generosity which, I think, works with rich pairings.”

How to match sparkling to festive food
Christmas is often the time when we reach into the dustiest corners of the cellar to unearth something particularly special – aged fine wines, meaningful bottles and, of course, delectable, sweet and fortifieds.

So, where’s the right place for English sparkling in your festive feast? “Well, there’s nothing stopping you serving it from start to finish,” says Laura. “In my house, we always open Gusbourne Rosé in the kitchen while we’re cooking – it’s perfect alongside all the nibbles.

“Then, for a starter – perhaps salmon or oysters – it’s the Brut Reserve 2019. How often do we serve smoked salmon with a slice of lemon on the side? It’s the same principle with sparkling wine. You have that intense flavour from the smoke and the oily fish balanced with the fruit, the acidity, the richness and complexity, plus weight from the lees ageing.”

And for main course? Assuming it’s turkey, then aged sparkling wine brings its own special umami-rich alchemy to the equation. “Think about that salty, caramelised, crispy skin and the delicate flavour of the meat. A wine with rich, bready flavours works incredibly well,” says Laura.

This is where lees-aged sparkling can step up. “When a wine’s aged on its lees, you develop flavours that represent themselves as toasty, nutty, or bready in character – or perhaps brioche and freshly baked biscuits.” It’s precisely this rich, complexity that you’ll find in our special release cuvée, Fifty One Degrees North – a statement bottle at any time of year.

Then, to the cheeseboard. “With a Comté, a lovely creamy blue or a washed-rind cheese, opt for Blanc de Noirs – it’s got that nuttiness, acidity and the texture from the bubbles. It works really well with these kinds of cheeses.” Later, as everyone relaxes into the evening – perhaps with a few more presents and the possibility of a turkey sandwich – Laura returns to Rosé. “It lifts and livens everyone,” she says. “There’s just something about bubbles.” 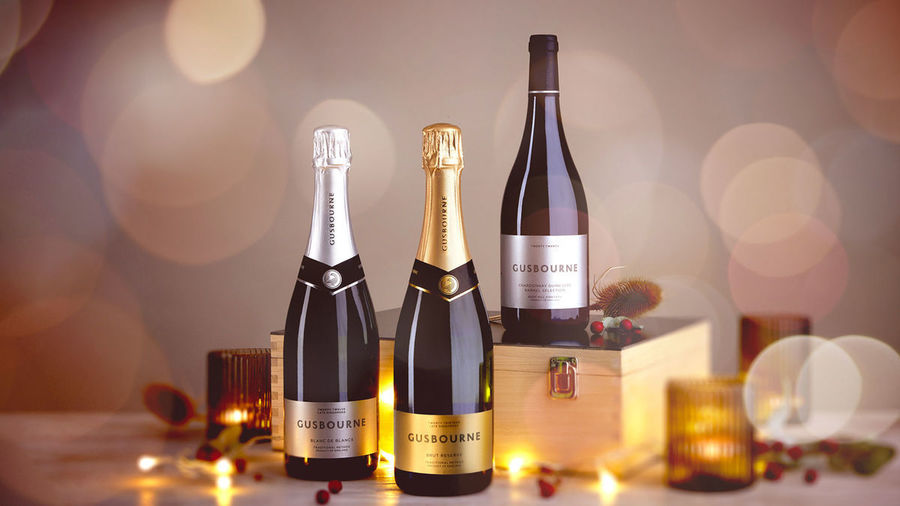 Christmas show-stoppers, recommended by our experts

Read the team's favourite wines for the season, from; Charlie Holland, our Chief Winemaker, Laura Rhys, Master Sommelier and Alastair Benham and Mary Bridges from our winemaking team. 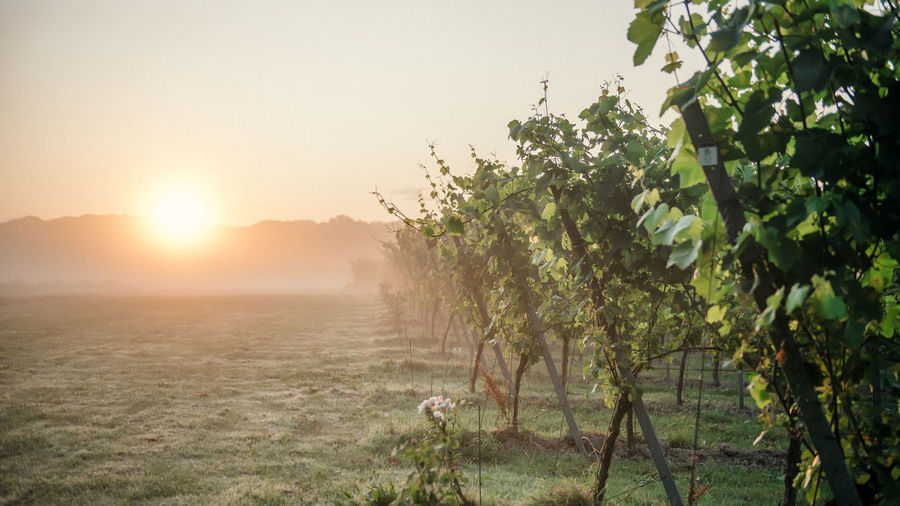 Whether they're new to the world of wine or a real connoisseur, gift an experience at our Appledore Estate. 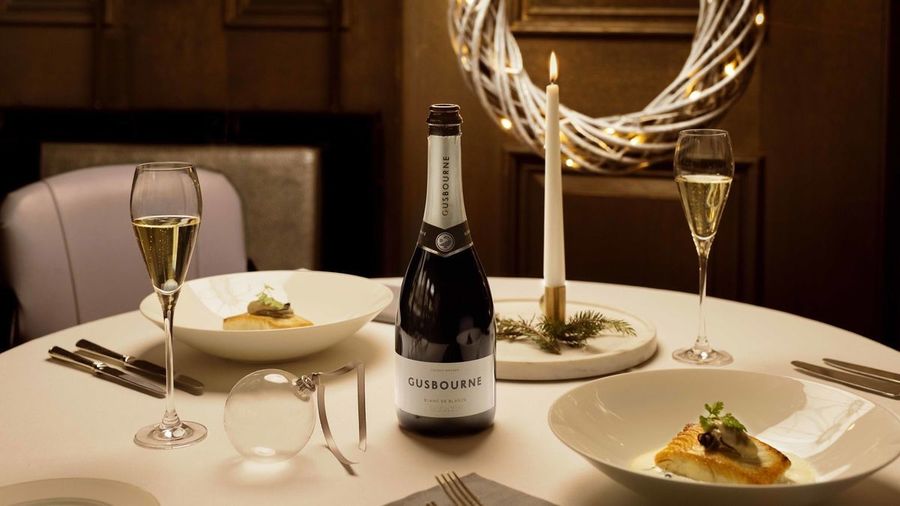 Festive moments and wines to match

Discover the perfect Gusbourne wine pairing for every occasion this Christmas. From a festive gathering aperitif, alongside your Christmas Day feast or after a brisk winter walk.